Bugs Bunny (from The Looney Tunes) 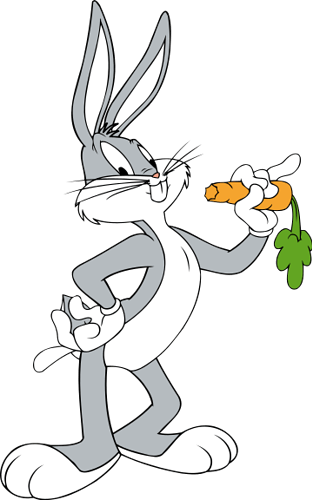 image360×576 48.2 KB
Description: A wrascally rabbit that’s been doing this since before you’s was born
Quote: “Ehhh, What’s up doc?”
Trial Team: Red
Stars: 1
Entrance: Bugs will enter the battle field by tunnel, and then pop out of the tunnel looking at a map and scratching his head before he notices the creeps and gets ready for battle
Victory: Bugs will laugh as he pulls out a carrot and then begins to munch on it
Death: Bugs will yell in agony before falling to the ground dramatically
Role: Frontline Damage

White skill: Strike!: True Damage
Bugs will burrow under ground and dig to the enemy of the players choice before jumping out of his tunnel to hit the enemy right upside the head with a baseball bat, dealing X damage and and decreasing the enemy’s armor and reality by X. The enemy will also be stunned for 10 seconds. Bugs will not return to his position but will stay where he burrowed to. If on auto Bugs will burrow to the furthest enemy.

Green Skill: Pie Comin’ At Ya: Normal Damage
Bugs will pull out a pie and throw it at an enemy with a speed buff. If no enemies have a speed buff he’ll throw it at the furthest enemy. When the enemy is hit the pie will deal X damage and slow there attack and movement speed by 30% for 16 seconds.

Blue skill: A Safe Investment: Fantastic Damage
A lever will grow out of the ground and Bugs will pull it, causing a safe to fall on enemies, dealing X damage to all enemies. This will also slow all enemies movement speed by 20% for 15 seconds.

Purple skill: That’ll Hold Em
Bugs and allies will deal 30% more damage to slowed enemies. Along with this “Strike!” now will slow surrounding enemies’ attack speed by 20% for 17 seconds

Red skill: Ain’t I A Stinker
Bugs will have his skill power increased by 30% at the start of each wave for 20 seconds and have his all his skill cooldowns decreased by 20 seconds after KOing a slowed enemy.

Bugs Bunny and Mickey Mouse
Disk: Mouse A Muck
Bugs will gain attack and have his health bar increased by X when he slows any enemy. This can happen every 20 seconds
Mickey is a bummed due to having a bad day because Pete and all his friends have been bullying him lately, Bugs notices this and decides to teach Mickey how he handles bullies
Disk:
Allies: The Big Bad Wolf Mortimer Mouse Pete

Bugs Bunny and Shaggy
Disk: Interesting Delicacies
Bugs will be healed X health when he uses “Pie Comin’ At Ya”
Shaggy wants Bugs to help him make new sandwiches with his pies, Bugs can’t say no or he might get socked the way he did before
Allies: Colette Swedish Chef Linguine and Remy

A) He’s a property of Warner Bros.

B) Looney Tunes already has its own gacha game.

I understand where your coming from but like it says in the title, this is highly unlikely. And just cause they have a gacha game doesn’t mean I can’t make a concept of Bugs

I never said you couldn’t. I was merely pointing out those things. I hear what you’re saying. It’s cool, but odds are, as you said, low.

I will eventually, but I want to do Wile E. Coyote first(he’s my favorite). But this is a dead topic please don’t revive it