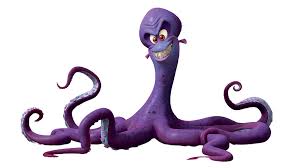 Description: It’s Dave! Back for revenge after getting kicked out of the zoo and loosing the spotlight, he’ll make it his mission to make any creeps uglier than they already are.
Quote: “The humans know me as Doctor Octavius Brine, renowned geneticist, cheese enthusiast, and frequent donor to NPR pledge drives…. but you know me by a different, much older name. A name perhaps you hoped you’ve never hear again. A PHANTOM! A shadow of a former life! I AM… Dave!”
Stars: 2
Trial Team: Blue
Entrance: Dave will enter the battle field in his human disguise, Doctor Octavius Brine, before removing it revealing his true form. He’ll also roll in a smaller version of his Medusa Serum ray 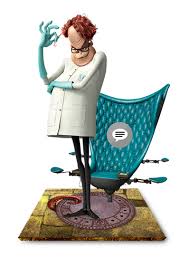 Victory: Dave will grab one of his snow globes in his collection and hug it
Death: Dave’s Medusa Serum machine will zap him and turn him into a small, cute version of himself, then a snow globe will fall on top of him, incasing him inside
Role: Midline Control

White skill: Medusa Ray Blast: Fantastic Damage
Dave will fire the Medusa Ray at the closest enemy with the most skill power, dealing X damage and applying Ugly to them for 20 seconds. Enemies with ugly applied will not gain any buffs for as long as it is applied.

Green skill: Octopi Spy: Fantastic Damage
A vending machine will fall on top of Dave incasing him in it, Dave will then throw three bags of Cheesy Dibbles at the furthest, closets, and middle most enemies. Dealing X damage and blinding the enemies for 10 seconds

Purple skill: Insatiable Revenge
Dave’s and Allie’s’ skill power will be increased by 10% for every ugly enemy on the battle field

Red skill: Forgotten and Revered
Ugly enemies will have the buffs they are given stolen by Dave, once Dave steals 5 buffs for himself he’ll give buffs to the weakest ally. The cap of buffs for Dave resets for each enemy

Dave and Hank and Dory
Disk: Octopi For Hire
Dave will enter each wave invisible for 5 seconds
Dave attempts to hire Hank as his right hand man, but Hank is not buying it.
Allies: Gerald, Marlin, and Nemo Davy Jones Merlin

This is pretty good. The movie was HILARIOUS!

What do you mean wrong movie, Dave is from the Madagascar franchise. And this is considered “unlikely” therefore it’ll never happen