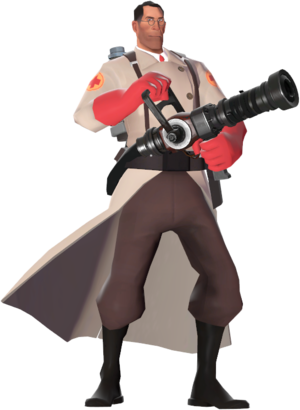 Description: A man of science and medicine, Medic will use the power of his Medigun and other weapons to seal victory for your team
Quote: “The healing is not as rewarding as the hurting.”
Stars: 3
Trial Team: Red
Entrance: Medic will already be on the battle field as doves fly from behind him in an angelic fashion
Victory: Archimedes will fly to Medic and he’ll smile at him as he pets him
Death: Medic will scream in horror
Role: Backline Support

White skill: Medic!
Passive: At the start of each wave the player will choose an ally for Medic to link to, Medic’s linked ally will be constantly healed X health by Medic’s Medigun unless Medic is using any of his skills. If the ally is KO’d, Medic can link with a new one by using his white skill
Active: Medic will use his Medigun to Uber Charge his linked ally, this will make them invincible for 15 seconds and increase their basic attack power and skill power by 30% for 10 seconds

Green skill: Ubersaw: Fantastic Damage
Medic will pull out the Ubersaw and stab the closest enemy with it, stealing 25% of their energy and splitting it evenly between him and his linked ally and dealing X damage to the enemy

Blue skill: That Was Not Medicine: Normal Damage
Medic will begin firing the syringe gun for 10 seconds, he’ll fire it at the enemy with the most health. Every shot from the syringe gun will steal 5% of the enemy’s health and give it to the linked ally

Red skill: Out Smart Bullet
Medic’s linked ally will also have their health bar increased by 17% when linked to Medic. Along with this, Medic has a 30% chance to make his linked ally invincible for 10 seconds and increase their attack and movement speed by 30% for the rest of the wave

Medic and Sniper
Disk: Breakthroughs In Science
Medic’s linked ally will be revived the first time they’re KO’d in each wave
Sniper is still curious as to how Medic revived him after being killed, Medic decides to show Sniper by testing on some creeps but that doesn’t go well
Allies: Woody Donald Duck Gerald, Marlin, and Nemo

Medic and Bunsen and Beaker
Disk: Oops, That Was Not Medicine
Medic will heal all allies X health when he uses “Ubersaw”
Medic is fond of Bunsen’s methodologies for science, together, they attempt to invent a cure for being creepified, using Beaker as their lab rat
Allies: Kermit Mickey Mouse Tron