I created a mechanic that supports both Scare and Study in my Dean Hardscrabble concept, so I thought: why not create a character concept that focuses on this mechanic instead of having it as an extra? Feel free to leave any feedback! 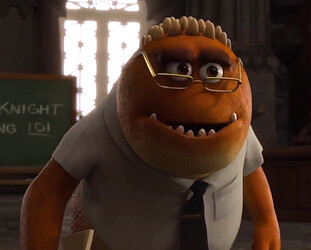 Professor Knight wants his students to always give their best in terms of Scaring, so after seeing the use of Scare against the creeps, he decided to enter the battlefield himself to teach the heroes how to Scare properly, because a good Scare follows a good Research, and a good Research requires Study!

“Alright, alright, who can tell me the properties of an effective roar?”

Mastery Collections: Support
Entrance: Professor Knight walks into position and a clipboard glitches into his hand.
Victory: Gives a proud look at his allies and the player.
Defeat: Looks to the ground, ashamed that he wasn’t able to teach his allies properly.
Basic Attack: Throws a piece of chalk at enemies.

The Research for Success
Professor Knight looks at some notes about the enemies in his clipboard, applying Researched to all enemies for 10 seconds. If at least one enemy was already Researched, Scared or Studied; this skill also grants 50 Crit Damage and X Skill Power to all Allies and Professor Knight for 10 seconds. Researched enemies that are either Scared or Studied have 100% chance of receiving a Super Crit with the respective types of Damage.

Fantastic Damage
Professor Knight does a Scare Demonstration, Scaring all enemies and dealing X Damage to them. If at least 1 enemy was already Researched, Scared or Studied; this skill also applies “Taught” to all allies for 10 seconds. Taught allies have a 50% chance of dodging attacks from enemies that are either Scared, Studied or Researched and deal 50% more damage to them.

Crucial Information
Professor Knight takes notes about the enemies in his clipboard, studying all enemies for 10 seconds. If at least 1 enemy was already Researched, Scared or Studied; this skill also grants X Armor and X Reality to all allies and Professor Knight, and extends the duration of any buff that they had before by 5 seconds.

The Best of My Students
Whenever Professor Knight or his allies Scare, Research or Study an enemy, they gain 1 Stack of Hardy.
Studied enemies receive a Z Armor Debuff and Scared enemies receive a Z Reality debuff while Studied/Scared. The debuff value is doubled if they are Researched as well.

Professor Knight + Jumba
Campaign: Respected Researchers: Jumba and Professor Knight meet each other at the City’s University, and start a conversation about their fields of research. They befriend each other and decide to make a game night with respected researchers around the City.
Allies: Pleakley, Bunsen & Beaker, Dean Hardscrabble
Disk Name: Periodic Tabletop Game
Level Effect: -X Armor -X Reality to Researched enemies.
Star Effect: Enemies that are either Scared, Studied or Researched by Knight and his allies have “Exposed” applied to them while they have one of these debuffs. Exposed enemies receive 15%(+15% per star) more damage from Crits and Super Crits.

Which Disk Would You Use

This concept was well done,great job!