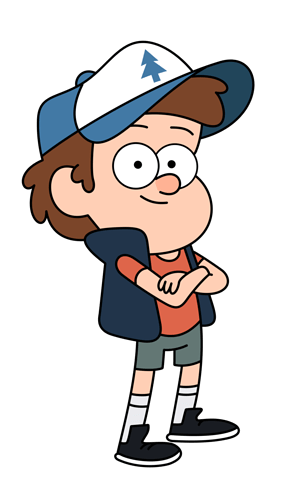 “Hey ghost! I’ve got something to tell you. I’m not a teenager!”
Stars:

Basic Attack: Dipper points his finger out in the form of a gun, he then shoots his finger causing a small orb to hit the enemy

Entrance: Dipper walks into his position with his hand in his vest, when in position dipper pulls out his journal.

Victory: Dipper looks down with a bit of a frown, but then suddenly smiles and fist bumps him self

Defeat: Dipper falls to the floor and curls up into a ball

White Skill: From The Journal

Normal
Dipper flips through the pages of his journal, he then points at the page and holds the journal out. The journal sends out a light beam that hits the enemy with the most energy dealing X damage and stealing X energy, the stolen energy is given to dippers allies.

If allies have more than 4 debuffs the energy given is decreased by X and Dipper heals them for X HP instead.

Normal
Dipper grabs a magnifying glass and uses light reflection to shine it against the 3 enemies with the most energy. The light deals X damage and X energy is stolen from the enemies hit and is given to Dipper’s allies instead.

If enemies have 4 buffs or more Dipper steals 2 of them and stuns them for 8 seconds. The stolen buffs are given to Dipper

Fantastic
same animation as “From The Journal” except the light beam doesn’t happen
Dipper then spawns 3 zombies from the ground, each zombie has X HP. When the zombies come from the ground the enemies are scared for 10 seconds.

The zombies distract the enemies. The zombies begin to walk towards the enemies, each zombie goes for the top 3 strongest enemies. every time a zombie hits an enemy they scare the enemy for 1.5 seconds and deal X damage. Whenever Dipper uses a skill the Zombies gain a 30% speed increase for 10 seconds (can stack). When a zombie dies they deal X damage to the enemy they were attacking every second over 5 seconds.

Red Skill: Secrets Of The Forest

Blind has a chance to fail against enemies above level X

Which friendships would you use

You… Didn’t finish the animations

The official name of the mechanic is “Distract” by the way.

Didn’t you just do a concept yesterday?

This is an interesting concept, but I think the zombies are quite op. You’ve been doing a good job!

Yeah but it was a collab, I didn’t do much on it

Thanks! I’ll fix up the zombies later

Oh right i completely forgot, I skipped them and went to the skills and I forgot to fill them in