Creep Surge was one of the earliest features for Disney Heroes. Over time it’s started to show its age, so we wanted to give it an update. This includes many quality of life changes players have wanted, but we’ve also made some mechanical changes for improved gameplay.

You’ll still clear districts and waves as before, but now doing so will contribute points to your Guild. As your Guild earns more points, the Guild’s reward tier increases, which increases the gold your entire Guild earns from Surge!

For now, the Surge rework will only be available on servers 2 & 9. There are some polish elements we’re still working on, but we want to gather feedback from these servers to make improvements before a global release. 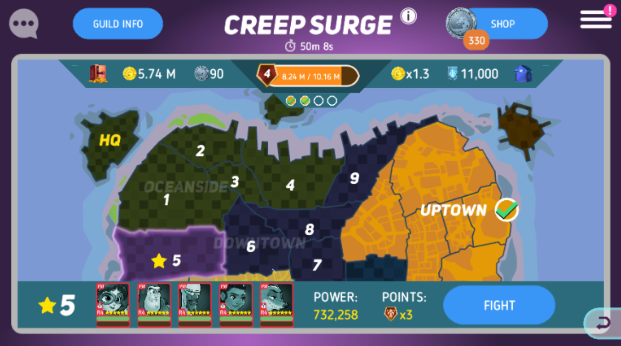 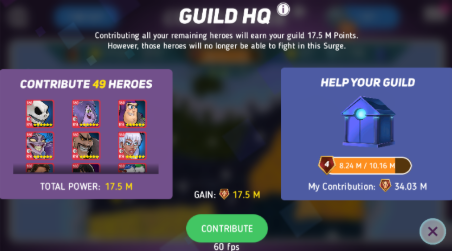 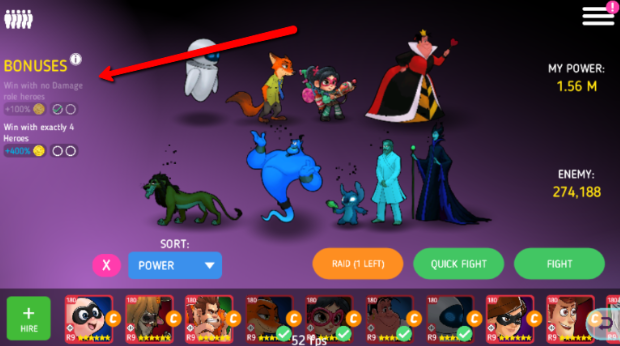 Cool… tnx for the work y’all do.

Removed the wave limit in Surge–

Can’t this just be a mode? I really like the limit, and it is better for newer guilds…

This looks so exciting. Does anyone know how long servers usually test something out before it is available to other servers?

Wow, this is so much information, aside from that, I like it!

That seems better so guildmates in different timezones don’t have to worry about missing out.

Surge reset times are no longer tied to time zones and Surge will now reset for everyone when war resets (11 AM CT).

Removed the wave limit in Surge–your guild goes as far as it can!

Wow, this is good, now everyone can pitch in and not worry about missing out since there was a wave limit!

A note on rewards: Given the new reward system, it’s impossible to make rewards in the updated Surge exactly equivalent to old Surge. However, we’ve done our best to make rewards comparable for most people. This is something we’ll be closely monitoring.

If surge fights don’t reward gold instantly and you ran out of gold to afford hires does that mean that you can only use your own heroes?

I mostly liked all this when it was explained in the guild leader section, but still have a couple of questions / suggestions -

Note that this means you won’t instantly gain gold when defeating districts anymore, but you’ll get all your (multiplied) gold when Surge ends.

Why? This didn’t need to happen. Just reward the x1 gold on battle win and then the additional bonus on surge end. There’s been tons of times I’ve used the gold earned during surge for some purpose or another - having to wait to receive any until the next day is silly. Especially since surge will now end after contests end.

Contribute unused heroes at the HQ to earn points for your Guild.

This would be better if the points were based on number of heroes contributed, rather than power. Or at least some value that takes both into account. Nobody will (or should) contribute their most powerful heroes, as those are the ones they should battle with. It’s our 65 purple heroes we want to contribute, but it seems like they won’t be worth much.

Added the ability for players to still attack districts already cleared for the wave.

This sounded good when it was described initially, but now with this detailed description I can just see it being abused. Few people surge for the benefit of the guild - they surge for their own resources. Tons of people will just take the gold from the easy cleared districts and ignore the overall goal.

When you’re on the hero lineup screen for a district, other players will be unable to select that district for 3 minutes.

… Can’t it just lock them out while you’re actually in the screen? I could in theory hit said district like 6 times while some chump is sitting there locked out. If it’s in the last few minutes of surge and we’re rushing to get more rewards, I don’t want people getting locked out of districts for 3 minutes.

You will notice that the gold granted per district is much less than you see in the current Creep Surge, but overall the rewards should be comparable.

How will they be comparable if the gold per district is much less? If we have to work harder to bump up our bonus multiplier just to receive the same gold that we did before, is it really a bonus?

Everything else sounds good.

I like the idea of being able to hit some of the cleated zones because many guildies are too weak to hit if lower zones are taken, so they ignore Surge. However, I have mixed feelings about no immediate gold. Often times, that gold helps me continue to hire mercenaries for subsequent Surge hits. Now I have to make sure I have enough gold to hire.

I asked it a few times already but still hasnt gotten any answer regarding about all the difficulties perks we have unlocked?

What will happen to them? And do we need to unlock Endless Surge or it will be automatically implemented to us all?

Pls, I’d like to have some clarification on this. Thanks

And also, shouldn’t you release the change on lineup of CW and Surge to our server 9 before implementing Endless Surge to us?

Yesterday, in Surge, most of our districts had Beast. Almost all of them. That was no fun

The day before in Surge, we had Beast in every district from 5 to 18 except for one (8 or 9, I forget which). I still have no idea how we were able to finish 20 waves of that nonsense.

I would love to see something implemented where a hero couldn’t show up in more than 1 team per region (or in more than 2 teams in the Uptown region, since that’s 6 districts); it gets frustrating to see Beast and Randall in 50-80% of the regions between 10 and 19 pretty much every single day.

I think this would have to be something that goes ibto the feedback.

after all being said and done… the most impt consideration are the rewards. if the gold does not match the rate of upgrading skills and badges… it is not an improvement. will test out hopefully it does…

You will notice that the gold granted per district is much less than you see in the current Creep Surge, but overall the rewards should be comparable

But i think those bonuses will almost equate old and new Creep surge
Though Every change is awesome.
Just a suggestion: HQ pts should be based on sth other,rather than Total power of heroes left