Is Nick and Randall useful?

I’ve heard and seen many people who use Nick and Randall in city watch and those that unlock their skills always KO me. Are they good? When you’re replying, note the following:

1st: NO SPAMMING!
2nd: Thanks in advance to all people who reply me

That’s all. Thanks again for helping me.
From Prince Tamatoa III

I heard that Nick’s red skill is really good for him.

Forum rule so no need to say it

2: I only use randall he is really good, I never use nick though so I wouldn’t know

OK. I’ll see if he is worth it or not 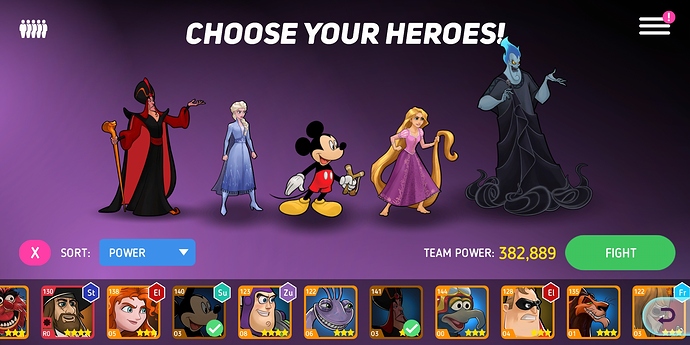 Who should I replace Nick with?

Both are very useful, especially in scare teams, as both mostly deal fantastic damage. Something that needs to be mentioned:
-Nick required Purple Skill Power mods for his Skill Power bonuses to become much more effective.
-Randall’s blue skill is the most painful one-when Randall is visible, make sure your enemies are scared. Also try to put him in the middle of the enemy team with his white skill for his blue skill to hit even more enemies.

Nick with his red skill (and also without) is very, very good for city watch. He’s a staple in my team when I just want to breeze through it. In that team I’d swap him for Mickey since he’s not really needed, but you never really want to be tackling city watch with just 1 specific team - especially seeing as Epic is available on your server.

Hades and Rapunzel should stay. I would replace Mickey and Jafar with Randall and Nick. Elsa deals a lot of fantastic damage, so she could also get an advantage of Randall’s scares.

Its common sense no need to say it

Jaffar has no red skill? So he wont benefit from epic city watch rub no?

It’s true but he also has many disables, giving his team a range of disables. My current team can Stun, Freeze, Charm and Blind

I find Nick very useful for City Watch and really recommend him having him as a backup even if you don’t always use him :-).

Sulley can probably be a decent choice as well to have as a backup as Sulley can heal the team at the end off the battles, and as such be good at having the team up to full health always :-).

Another question: In Nick’s red skill, does enemies lose armor for 13secs or does it stack with each use?

Sulley also scares with his white skill, so if you can keep his energy meter full, you can use it at the start of battle and immediately make the other team vulnerable to crits from fantastic damage.

True as well, but with Wall-E Sulley is able to activate his White skill 2 times if not 3/4 times depending on luck, and together with Nick it is even better combo as Nick can do 1-2 if not 3 White skill activations with his Lemmings. And as you already have Wall-E in the team in this team you can activate Wall-E’s White freeze skill making the enemies likely unable to attack while taking all that damage.

While Hardy and similar skills may stop the Freeze and Scare, they still can’t stop all that base damage which is still going to be really potent damage :-).

This is a combo I use in City Watch and usually carry me through City Watch :-). Just need a backup buff remover in case Meg is linked with Mulan or Beast and such, as in removing the non-crowd-controlable Invincibility Meg gives after she is down.

Anyone else? I may need more opinions. I need to see if I can be convinced enough to use Nick

If you can get a few +purple skill level mods on nick and get his red skill, he’s amazing. Otherwise, he’s pretty bad.

Even before you reach that stage, Nick is useful in City Watch, Invasion, and Heist. I’m not going to argue that you need to invest in him, but if you choose to do so at least he won’t be useless before getting his red skill. 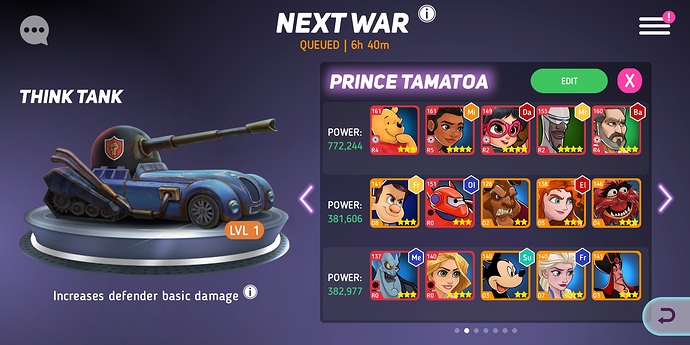 If I asked u to swap someone (Hades and Jafar should not be swapped with someone else as both of their friendship disks complement each other.) from any team, where will u put Randall and/or Nick? Also, note that I am swapping Frozone with Powerline. (I’m working on upgrading him)

I would swap Felix for Nick and Mickey for Randall.