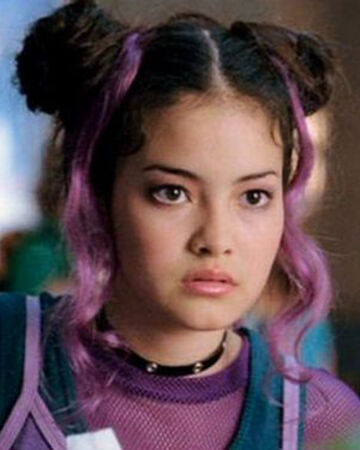 Even though it doesn’t appear all that helpful, Magenta has the power to turn into a guinea pig, which she can use to spook and surprise creeps.
Trial Team: Blue
Role: Frontline Control
Stars:

Quote: “I’m a shapeshifter. Bite me.”

White Skill - Red Wires - Fantastic Damage
Magenta turns into a guinea pig and chews on a bundle of red wires. The strongest enemy will either have X energy or HP stolen from them.

Green Skill - Guinea Pig Scurry
Magenta turns into a guinea pig and scurries past enemies, scaring them for 6 seconds.

Blue Skill - Shoo!
Every enemy Magenta scares after performing her “Guinea Pig Scurry” skill retreats to the backline in cowardice. These enemies will take 40% additional damage from allies.

Purple Skill - Seat For One
Magenta is immune to debuffs while in her human form. If she reaches 0HP, she regenerates her HP by 75% and continues the battle as a guinea pig. She will take 10% additional damage from enemies, but her attack speed is increased by 60%.

Red Skill - Crawl to Victory
Magenta deals 80% additional damage to enemies in her guinea pig form. Enemies scared by Magenta cannot have any buffs applied to them for the rest of a wave.

Friendships
Magenta + Will Stronghold
Campaign: Team Not-So-Successful - Will and Magenta narrowly escape a creep outpost on their patrol, with their secret battle plans in their possession. Now, the two are on the run and looking for people to share their discovery with.
Disk: Squeal Steal
Disk Memory: Magenta is immune to debuffs for the first 9 seconds of each wave.
Disk Power: Z shield

Magenta + Linguini & Remy
Campaign: Rat Whispering - Magenta is able to communicate with Remy, relaying his speeches to Linguini. With Magenta as their new translator, Linguini and Remy are more aware of each other’s decisions in the kitchen.
Disk: Say Cheese
Disk Memory: Magenta’s attack speed increases by 55% each time she takes damage from a scared enemy.
Disk Power: Z energy gain, Z armor