Sisu (Fiendship Campain) and how to make her charm immune 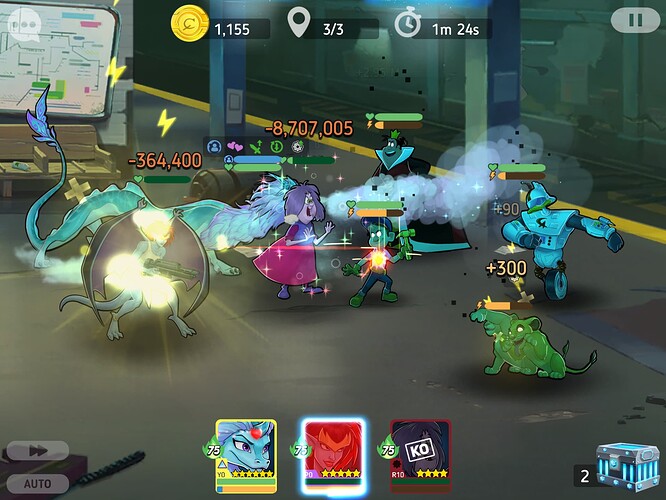 Sisu gets charmed in the 3rd wave and then oblterates her teammates with her fog breath.
Is there any way to stop her being charmed?

As an aside, this is the worst Friendship Campaign I have ever played, her “alliies” are all characters I have never used or upgraded (villians) and I had to upgrade Madame Squeem to R10 just to get past one of the earliest missions.
As you can imagine, I was quite annoyed/irritated to waste so much stamina on someone I am not using.

As you can imagine, I was quite annoyed/irritated to waste so much stamina on someone I am not using.

You are not meant to solo friend campaigns.
That’s what anyone would say

That’s what anyone would say

I wouldn’t actually say that

Sure, maybe that is how PB intended it, but they also know that we can’t work on all characters, and that is on purpose. So really they shouldn’t expect us to do so for friendship campaigns either. So really, there shouldn’t be stuff like this, where you can’t escape an early disable like this (or Elsa’s freeze)

This is what happened last time:

Sisu vs the Freezemonster Friendships

Sisu always gets permafrozen for this battle. [image] She is R10, but apparently that was not enough to defeat this monster. So how can she resist the freezing effect? Being the first chapter of a friendship, no other team members can be added to assist.

As I have been told, the problem is Sisu simply does not have any Evasion stats, so she can’t resist immobilization, not even at Yellow level.

Stamina isn’t free, I have to buy it!
Hence why I resent using it on unused characters.

Simba/Nala are extremely problematic in many friend campaigns, especially older ones after their refresh. You basically have two options; either power up to ridiculous proportions so Sisu lives through the charm and then can finish the battle or level up the other heros so they can deal out enough damage before getting hit by Sisu to win.

They are the problem, but saying they shouldn’t have been added to the game seems like an overreaction; I would instead say that they shouldn’t be in friendship campaigns where the featured hero is at or near the back of the formation, or that friendship powerups should give more Tenacity or Evasion as a way of dealing with them.

Unfortunately, this has been mentioned as a problem since last August, so I can only guess that PerBlue is intentionally using them to make friendship campaigns harder.

Upgrade Demona and Mim.
You can’t expect to beat a current level campaign with characters that low.
A fully leveled Demona should be able to tank the breath and blast the cubs away with her bazooka.
They are both worthwhile characters to have anyway.

You are not meant to solo friend campaigns.

No Offense but I hate it when someone says this

suspect it is the lion cubs who are charming her, they always cause this problem and that is why they are high up on my list of characters who should have never been added to the game.

It is Simba’s fault. After refresh, they charms the farthest enemies for 15 sec

and I hate them too. Sooo annoying in friend camapgin

As someone who doesn’t have stamina to work on useless heroes, I refuse to do it (other than upgrading the friend hero to max lv to lv up the disc). And until now, I have completed quite some campaign using only 1 hero. The latest one is Bagheera-Baloo

I completed it, but sure as hell did NOT enjoy it

To solo friend campaign, you need to make sure your hero is strong enough and can survive on their own when their allies get K.Oed, which happens all the time. To do that, you need to use armor and reality mods on them, making them a walking fortress

You also need to time their white skill. And pay attention to how enemies use their skills.

Sometimes, it is better to bring LESS heroes in friend campaign than bringing all of them. Except the friend hero, the other 3 are optional. There are many cases I won by leaving those dead weight behind

No Offense but I hate it when someone says this

I don´t agree with it, but it was officially stated that way…

It is Simba’s fault. After refresh, they charms the farthest enemies for 15 sec

and I hate them too. Sooo annoying in friend camapgin

Because all heroes can´t have at least some Evasion OR Tenacity or both. Seriously, that´s the devs issue, even if the stats on heroes won´t work much, they would work for Friendship Campaigns.

That´s why all heroes in my opinion should have at bare minimum 290 Evasion or 290 Tenacity or both. In PvP it would be a guaranteed 0%, but in friend campaigns it´d actually be helpful.

I don’t think Sisu’s white skill is worth anything in terms of offense: 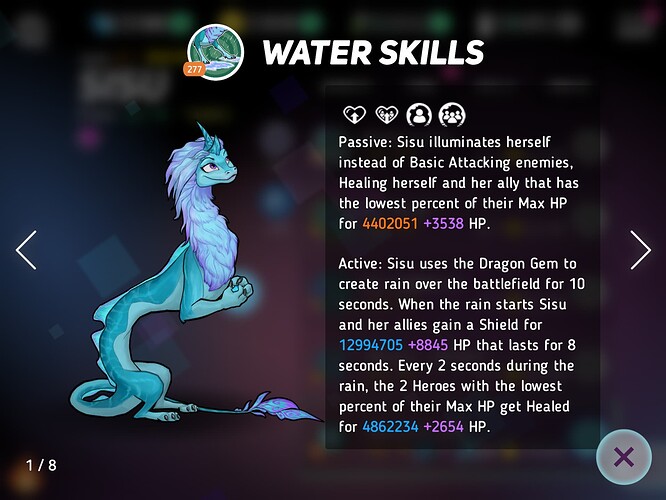 image1920×1440 162 KB
There are times when I simply don’t use it so she will use her combat skills instead.
There have been occassions where Sisu has just stood there illuminating and I was like, use Fog Formation and one shot the enemy team!

How much more does Sisu need to be upgraded to take on the cantankerous cubs solo?

How much more resources would I have to expend to bring the team up to parity? 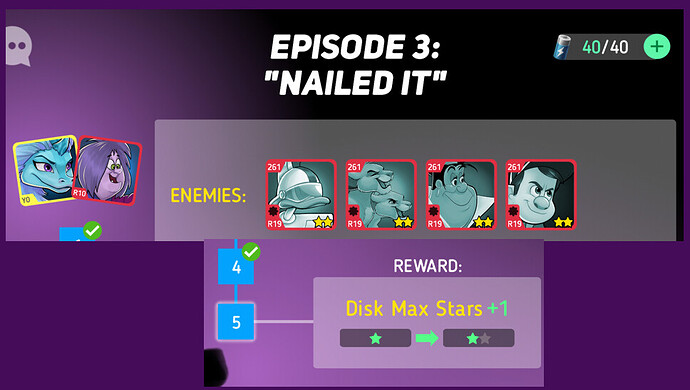 image968×548 98.1 KB
It is just not worth it for one battle, when one of them will most likely be replaced for the next chapter by somebody else.

To be candidly honest, I am uncomfortable being told to use my stamina and gold to upgrade some random character unused by me.
If that advice is to be followed, send me a gift basket containing the relevant resources to pay for the upgrade.
Sardonic humor in case it was not obvious.

How I hate that pair of lion. I was stuck at Drakken-Gizmo friend campaign because of them as well

I finally completed that campaign after promoting Drakken to R6, with 58 power-ups!!! And I did it because I unequipped Drakken’s disc so that he didn’t K.O himself

I don’t know why they made such horrible friend campaigns but it was such a pain finishing it. I hope you could finish this as soon as possible. But please, don’t waste your stamina on useless heroes. Instead, pls focus stamina on your Sisu. At least, you won’t feed as frustrated. Good luck

I don’t hate them as characters, but I do hate the way they’re implemented in the game. I’d like it better if they were in adult lion form and seperate characters. And yeah, I hate facing them in friend campaigns too. If it’s not the charm, it’s that blasted roll attack that they keep spamming like crazy.

Somehow I got my team to just barely survive the charm phase, then they used the aforementoned roll attack and it was game over for what feels like the 100th time.

Mim and Demona aren’t useless and also expecting to win a campaign with unleveled characters is silly.

Hi. I don’t know whether or not you have completed this disc. But I want to say, I’m experiencing the same problem as you. The only difference is I’m working on Mushu disc for Sisu

And guess who is blocking me? Simba!!! They charms my Mushu and boom…he K.O all my team

I freaking hate those lions​:roll_eyes:

I eventually did complete the disk, somehow.

But it was not easy, I had to fight and lose several times before Sisu finally managed to defeat the cubs just once.

I think it’s not just you and me, whenever the cubs appear in any Fiendship Campain, they just make players angry and thus, earn a lot of warranted hostility.

the two cubs are named simba and nala! I am a LionKingFan and I am an expert of lions and great topic?

This is why I wish they’d just give us one ally of our choosing, in all friend campaigns. In this case, I’d pick Mad Hatter, who not only makes his allies immune - with his red skill, but also has a charm of his own.