This is my submission for the Animal Kingdom Concept Contest! 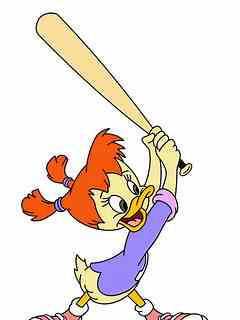 The youngster trouble maker Gosayln Mallard uses her knowledge from her father to take down any enemies that come her way.

Role: Control
Position: Middle
Trial Team: Red
Entrance: Arrives into position by zip line and gets a baseball bat out of her backpack.
Victory: Jumps and Cheers
Defeat: Throws her bat down, disappointed
Attack: Whacks enemies with a baseball bat

White Skill: Quiverwing Shot (Normal Damage)
Gosalyn shoots three plunger arrows at the three closest enemies, dealing X damage, stunning them for 7 seconds, and knocking them all the way to the back.

Green Skill: Soda Popped (Fantastic Damage)
Gosalyn drinks some soda, healing herself for X HP and cleansing all debuffs on herself. She then burps, dealing X damage to all enemies, silencing them for 10 seconds, and reducing their armor by X.

Enemies that already have their armor reduced will take an additional X damage.

Blue Skill: Shoot and Score (Normal Damage)
Gosalyn shoots a hockey puck at the “Most Wanted” enemy, dealing X damage to them and stunning them for 9 seconds. The hockey puck then bounces to nearby enemies, dealing X additional damage and have their basic damage reduced by X.

Purple Skill: Quick Witted
Gosayln gains X skill power and X armor while she has a speed buff. This will last for the speed buffs duration and 5 seconds after it expires.

Gosalyn gains 20% attack and movement speed for 10 seconds when stunning an enemy. This stacks up to 10 times.

Red Skill: Crimson Quackette
Enemies that get stunned again while already stunned receive 30% of their Max HP as bonus damage. Gosayln also removes all Hardy stacks and 1 active buff when damaging an enemy with “Quiverwing Shot”.