Here’s a place to put all your great ideas for heroes - even if they aren’t Disney!

He states…even if they aren’t disney

Well, you say that you want to see Sesame Street in the game

I said i would like to see characters from sesamestreet…you added the part in the game.

However, like I said Polaris stated… even if they aren’t disney, this means everything can be mentioned

You still confuses me, but okay 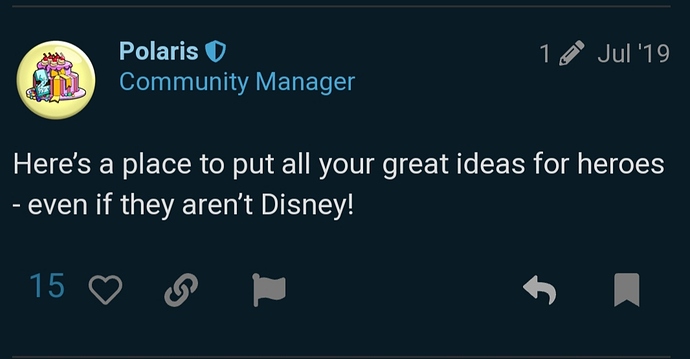 White: Elizabeth raises her sword up in the air and yells, increasing allies’ attack speed by 150% and granting them 500 basic damage, then swipes at the closest enemy, dealing 9000 damage and stunning them for 6 seconds.

Green: Elizabeth dodges a melee attack and jumps backwards, healing herself for 5000 HP, increasing her attack speed by 50%, and becoming invincible for 4 seconds. The invincibility has a chance to fail if she is above level (1).

Blue: When Elizabeth reached 25% of her max HP, she applies “Help!” to the closest ally. This ally guards her from all damage and takes it instead, and heals her for 3000 HP per second. If the ally guarding her is KO’d, she goes back to battle with a 8000 HP shield for 16 seconds.

Red: Whenever Elizabeth has blocks an attack or disable or has more than a 50% chance to, her attack speed is increased by 100% and she is healed for 80000 HP instantly. This can stack up to five times. This has a chance to fail if the enemy attempting to disable her is above level (121).

Jack Sparrow’s Disc: When Elizabeth is under 50% of her max HP, she is immune to negative effects (excluding disables) and deflects them back. | Extra Stats: HP, Basic Damage

Create your own topic about this

No need to necropost…

I’d you have an idea, make a new topic and make it there.

Soooo how do you make a concept? Is there like a template or do you just write it all?

I did one with a unlikley conpect

This category is for concepts, not hero requests (they overlap a lot, so I see the confusion). Maube try the Hero Wishlist category?