Intro:
This is PART 4 of the complete guide to all the Control Heroes in the game. As the “Control” category would suggest, these characters specialize in influencing the flow of combat through disruption and causing chaos. Each of them has a place in the game, so this guide will provide insight to each Control hero’s value.

Disclaimer: This Guide will always be under construction, either through updating information or adding more content as more new heroes are released in the game. I will be doing updates accordingly for as long as I continue to play the game.

We are just about done with all the Control heroes. Because Jasmine is still very new and I don’t have enough resources to max her immediately, her overview will have to wait a little bit. In the meantime, I will be writing about the rest of the heroes featured in part 3. Please stayed tuned.

Yes, I know I write a lot, but I must mention that Merlin perhaps has the longest overview I’ve ever written. There’s just so much to go through and yet I feel there’s still more that can be said. Yeah, just be advised that it’s a bit of a long read.

Does Scar count as a reliable Merlin counter?

Technically, anyone can be a Merlin counter as long as they have Timon & Pumbaa backing them up.

No, I specifically mean Scar because he’s untargetable thanks to invisibility.

No, invisibility is not enough. Scar MUST have Timon & Pumbaa to beat Merlin. No specifics here. That rule goes for anyone.

Tia is one of the best control to deal with melee comps imo, though I agree that she is certainly outclassed. Out of all control, she is the only one with a team wide knock back, making her useful in delaying melee threats, even if they are invisible. Her charm is amazing at dealing with the back line support that melee comps carry, and her silence prevent them from using skills to regain distance lost.

Unfortunately, her damage is pathetic, and she doesn’t have any strong AoE disable, so unless either get buffs, she is probably better as a counter pick.

Another Counter for Merlin is Darkwing Duck with the MrI disc. This stuns the first few heroes who crit dwd - meaning that Merlin Stacks energy more slowly and because his front line is stunned, he loses his rapid follow through aggression. This is a major backup plan for me when I need to use t&p in a different line for war or coli.

It is a pity that heroes are now immune to the denial of energy by the hex of Ursula, still. It is still one of my favorite controls, and yes, I usually match Maleficent (Ur) on my sand team.

Actually, there are no heroes that are immune to the energy drain, like, at all. Sure there are those that don’t get stunned, like Kevin, Hatter, and Anger, but they will still loose energy.

Betty and Zurg, yes. It seems that now when they activate their white skill they only consume a little of the energy, when they are bewitched by the hex.

It is still a mistake or just a bug, but it has not been resolved. : '(

Pretty sure it still works fine from what I’ve noticed. Characters with “channeling” Whites like Bo, Zurg, and Jafar will lose energy if they try to activate it. However, they will not be interrupted if Ursula Hexes them but they’ve already started using their Whites.

Well, as I told you, on my server 16. For what I have had to live, the curse of Ursula does not affect Bo, just as the invasion improvement that adds to the enemies the curse, does not affect them. 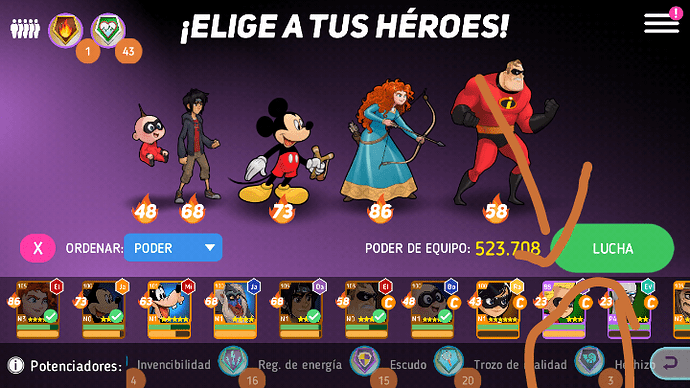 Ah, yes I just tested it. Bo, Zurg, and Jafar will be stunned, but most of their energy will remain. They will loose one “tick” of energy, but not all of it. They will be affected by Hex, but this doesn’t mean they are immune to it.

Edit: uh-oh, there’s some inconsistency with the testing. Bo will only loose a small amount of energy, but Jafar and Zurg will loose all of theirs like Normal.

So let’s point this out one more time. In this video, Bo only looses a small bit of Energy when she gets Hexed, but Jafar looses all of his Energy.

@Polaris we need this to be addressed.

I just wondering…what is aggro