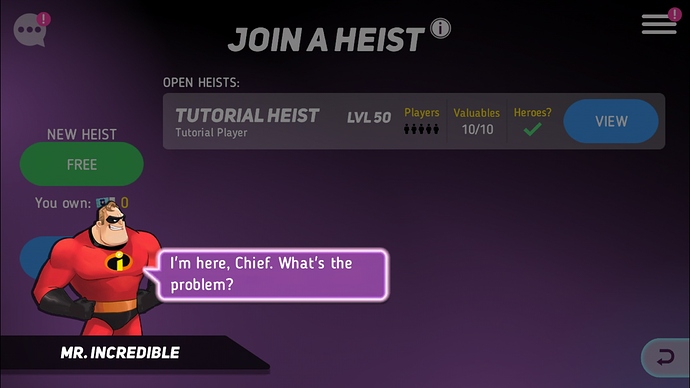 The Heist is a real-time cooperative game mode that you can play with up to four other players. Each player controls five heroes on the city map, who move, investigate, stand guard and battle.

Your goal is to find the Thief and defeat her before she steals all of the Valuables. Winning the Heist rewards Heist Tokens and Guild Influence. You can also earn Disk Power at higher difficulties. 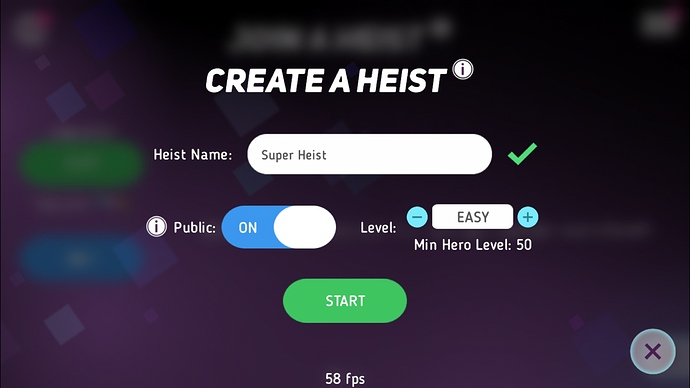 Heists can be public or private. Anyone can join public Heists. For private heists, the creator can invite friends or guild members to participate. Invites are sent via private chat, from the Heist creator to the invitee.

The Heist creator can set the difficulty: Easy, Medium or Hard. This determines the level of enemies you will face in Heist, how many lives the Thief has, and the amount of Disk Power reward you can win.

When you create a heist you’ve find yourself in the Heist Lobby. From here you can chat with other players in the Heist to prepare. The creator of the Heist can start the Heist whenever they are ready. Players can still join the Heist after it has started.

Time Is of the Essence

Once a Heist is started, the Thief is off and running! Make sure you invite other players who will join soon after starting. 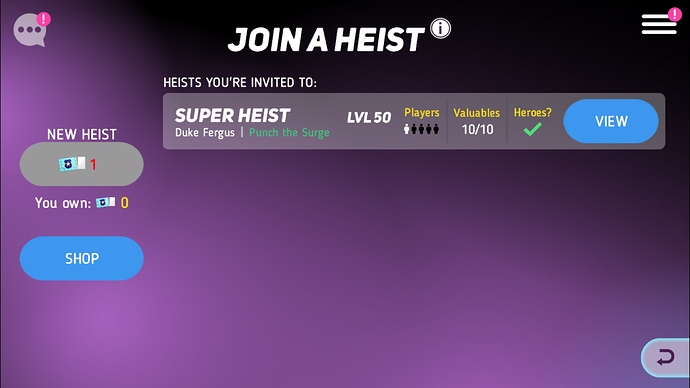 Each player receives 1 Heist Ticket per day. Your ticket can be used to create a new Heist or join an existing one. The “Join a Heist” Screen shows a list of Heists, both ones you’re invited to and ones anyone can join. It also shows: number of players in the Heist so far, remaining valuables (the fewer left, the further along the Heist), whether you have 5 heroes who can join the Heist.

You can view any Heist on your list. If there is a spot for another player, you can also join. Once you join a Heist, you must choose 5 heroes to use. Only one of each hero is allowed in each Heist. So if other players have already joined, some heroes won’t be usable. In addition, a few randomly selected heroes will be “off duty” each day. No one can use these heroes in any Heist that day. 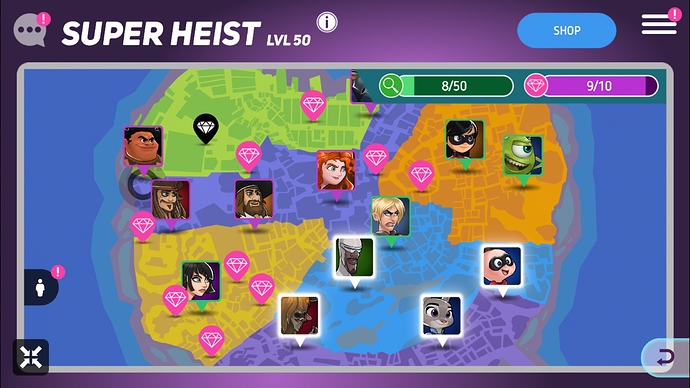 The map has two views: zoomed out and in. In zoomed out mode, you get a sense of how the whole Heist is going: valuables left, where the thief is and where the heroes are. In zoomed in mode, you can see more details and interact with elements on the map. Each player in the Heist is assigned a color, and your heroes will always be white.

The pink Valuable meter shows how many Valuables are left on the map. When the Thief steals all the Valuables, you lose! Remaining Valuables are pink; stolen ones are black.

The Thief has a Hideout hidden in one of the white “?” pins on the map. When you start the Heist, you have no idea where the Hideout is. As you collect clues, you will fill the green clue meter. Each time you do, the white circle gets smaller. The Hideout is always somewhere inside the white circle. 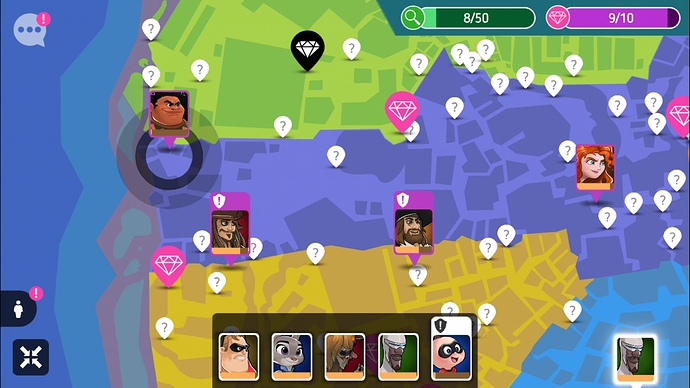 Interacting with the Map

Elements You Can Interact with on the Map:

Interacting with a POI is how you gain Clues. Tap a POI and then tap a hero to send them to Investigate. After a period of investigating, the hero will either: find a clue, get ambushed by creeps, or find the Hideout.

The Thief is always moving around the map, mostly unseen. When one of your heroes is near the Thief, you have a chance to spot her. If you think you know where the Thief is (use the black circle!), you can position your heroes in her path/area and hope to spot her. Just tap any open spot on the map and choose the hero you want to move there.

Stealing the Valuables is the Thief’s main goal. You can protect a Valuable by standing guard on it.Just tap the Valuable and choose the hero to guard it. You are guaranteed to spot the Thief before she tries to steal the Valuable. If you lose the fight she will take the Valuable. 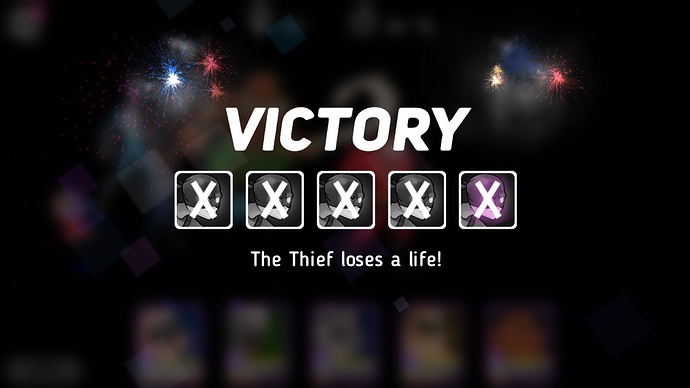 Two Different Ways to Win a Heist: catching the Thief directly on the map, or defeating her in her Hideout. On Hard difficulty, the thief has infinite lives, and you can only win by finding her hideout.

Catching the Thief on the Map

To do this you need to first spot the Thief. Spot the Thief by positioning heroes near her on the map. Heroes standing watch have an increased chance to spot the Thief. Once you spot the Thief, you can battle and defeat her. Because our Thief is a cat burglar, she has several lives. Defeat her enough times to remove all of her lives and you win the Heist.

The Thief’s Hideout is hidden in one of the POIs. Collect clues to shrink the white circle and narrow the location of the Hideout. Once you find the Hideout, you can battle the Thief. Whether you win or lose, the Heist ends after the Hideout battle. 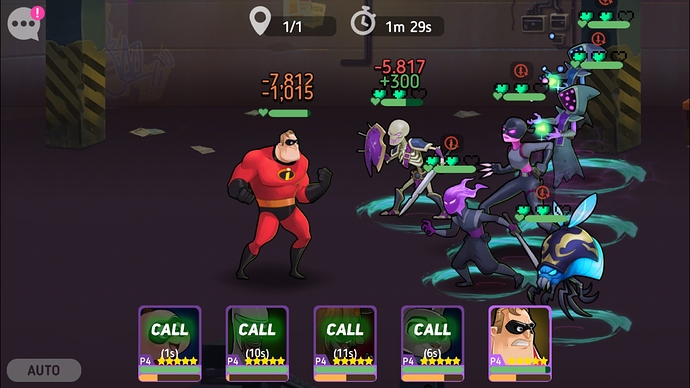 Battles in the Heist mostly work like battles in other modes. But there are some aspects of Heist battles that make them unique.

All fights in the Heist are started by a single hero. When you start the a fight, you have the option to call up to 4 other heroes. The heroes who come to your aid are always the 4 closest to you, regardless of who owns them. The closer the hero, the faster they will arrive at the fight. Heroes who are aiding a fight cannot perform other actions until the fight is resolved.

Energy is what heroes use to trigger their main skill in combat. In the Heist, heroes can also use energy to Sprint. Heroes sprint automatically when they have energy and are called to aid a battle. Sprinting heroes move much faster than walking heroes. Heroes sprint until they run out of energy and then walk. Heroes can gain energy in the Heist by sitting idle or participating in combat.

Any heroes KO’ed in a fight, win or lose, remain KO’ed for a time after the fight. While KO’ed, the hero cannot take any map actions. 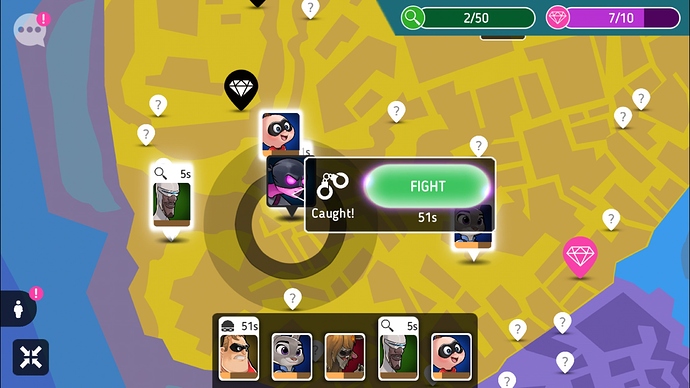 After investigating a POI, an unlucky hero can get Ambushed. While Ambushed, the hero cannot do anything else. The hero’s owner (only) can initiate a fight against the ambushing creeps. If the fight is a victory, the hero is now available to act!

A hero near the Thief has a chance to spot her. If spotted the Thief will run from the hero, who will chase and catch her. One caught, a fight against the Thief must be started within 60 seconds. ANY player can start this fight. If you defeat the Thief, she loses one of her lives. If she still has lives remaining, you gain a large number of clues. If she is out of lives, you win the Heist.

Once you find the POI where the Hideout is hidden, you can start the final battle against the Thief. There is no time limit to start this battle, but the Thief will continue to steal Valuables in the meantime. ANY player can start this fight. Whether you win or lose, the Heist ends after the fight. 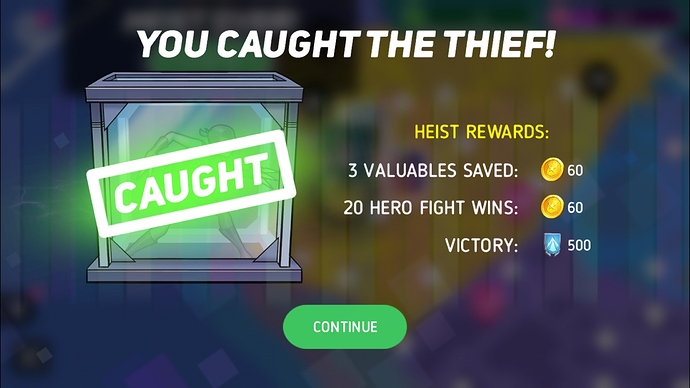 *Winning means catching the Thief or defeating her in her Hideout. 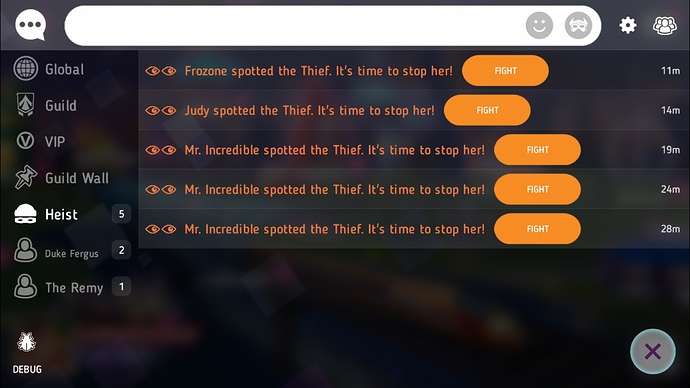 When you join a Heist, a new chat channel called “Heist” appears. All players in your Heist (only) can use this channel to communicate during the Heist.

Messages are also automatically send to Heist chat when: 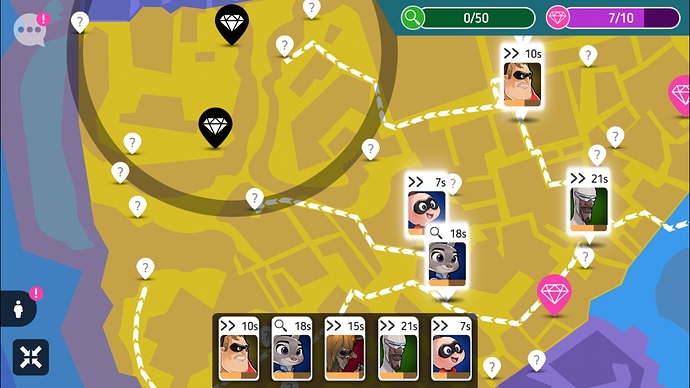 If You Know Where the Thief Is:

If You Don’t Know Where the Thief Is:

Watch Other Players’ Heroes & Use Chat

Good Luck and Have Fun!

How come I still don’t have heist?

Because you’re either not on server 1, or not level 50

Since you’re on S2 it hasn’t been released yet. Once they make the heist perfect on S1 they’re release it globally. Just try to be patient.

Okay I’ll try to be patient

No way to move an account between servers, but you can start a new one on S1 or other servers.

*Edit, found my answer up top. So we’re not allowed to use the same heroes as the ones already used.0.0

**Are knocked out heroes in one fight unusable for another heist ?

Help please. Heist newbie. I only deployed 5 heroes. When I try to do heist again sll but 3 of my heroes can be used. I don’t understand why. Did someone else use them ? I’m missing only 5 heroes in the entire roster.

If a hero gets ko’ed during a hiest they will be usable in a minute and you can still use thouse heros in the hiest.

Thanks Apollo that was very helpful.

Has anyone had restrictions on what heroes they can select in heist at the hard difficulty. My guild and I ran one on hard and had toons that were not allowed to be picked. Is this normal?

Yes. Those heroes are off duty. Random heroes go off duty each day

Yeah, not a big fan of that.

I have 28 heroes, yet sometimes I cannot join as the 5th player as ones I could choose…are locked out.

This is one of the worst features of the heist. It has been a long known issue that most non-big spenders cannot develop a large number of heroes due to various reasons. Now people can’t collaborate in a mode no one wants to spend a lot of time on.

I think it is actually a well thought out feature in the long run. As they continue to add heroes to the roster, without any restrictions, the usable heroes would be too abundant. By allowing only around 30 heroes usable, players will have to keep thinking up new hero combinations, instead of solely relying on their main attack team.

Or you just can’t play with your friends/guildmates… SO SMART!

I’ve just completed a heist on hard with 3 other guildmates. I was the last to join so i had horrible picks of heroes (my total power was only 20k+) . My guildmates total power was 40k+, 40k+ and 30k+. There was lots of coordinating and planning but we managed to clear it.

In my case, my “weakling” heroes spent most of the time guarding the valuables while the rest of my guildmates’s heroes were moving about hunting. We each have our role to play, so it’s really about how well you know your heroes. We finished with only 3 valuablesbeing stolen btw.

Heist is fun indeed, but AFKs make the matches take too long and you can’t do a thing about it… and the valuables have a higher chance to be stolen since AFKs do nothing, not even guard the gems.
A good change would be if some player join but stay with some heroes idle (not guarding nor searching for let’s say 5 minutes or less), he’d be kicked out of the heist, not winning a single prize AND HIS TICKET/FREE HEIST OF THE DAY WOULD BE GONE.

Btw, just because heroes are being added doesn’t mean off-duty isn’t expanded. Thus perpetuating the same issue. There isn’t a good reason for this restriction. Even storywise how does this make sense? When was the last time you watched a superhero movie about their DAY OFF?