The Penguins (from Madagascar) 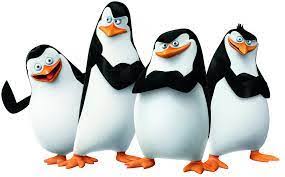 Names from left to right: Private, Kawalski, Skipper, Rico
Description: A group of psychotic penguins who are on there own agenda compared to everyone else
Quote: “Don’t give excuses, give me results!”
Stars: 1
Trial Team: Blue
Entrance: The Penguins will slide in on they’re stomachs
Victory: Skipper will high five all of his comrades
Death: All of the Penguins would smile with embarrassment and wave
Role: Frontline Damage

Basic Attack: Skipper will slap the closest enemy with his fin

White skill: Status Report: Fantastic Damage
Skipper will ask Kawalski for a status report, which would have him calculate it, studying all enemies for 10 seconds and dealing X damage to all enemies. The skill will deal X true damage to any enemies that are already studied

Green skill: Classified Catch
Skipper will signal to Private to pull out his fishing rod and cast it, pulling the furthest enemy to frontlines and snaring for 16 seconds, along with deal X fantastic damage over time for 13 seconds

Blue skill: Peppermint Shot: Fantastic Damage
Skipper will grab Rico like a gun and fire three peppermint candies at the three furthest enemies, dealing X damage to them and stunning them for 10 seconds

Purple skill: Smile and Wave
When the Penguins reach 0% of health they will revive the themselves for X health and give themselves 30% increased attack speed and movement speed for the rest of the wave. Along with this, the Penguins have a 20% chance to study enemies with they’re basic attack for 10 seconds. This can only happen once per wave

Red skill: Agents’ Moxie
All enemies including the Penguins will deal 20% more damage to studied enemies, along with this, allies’ white skills have a 15% chance to study enemies for 15 seconds. An ally’s white skill can only study an enemy once per wave

The Penguins and Mason and Phil
Disk: For Hire
The Penguins will gain technicity for 15 seconds after KOing an enemy
The Penguins decided to assemble they’re own patrol team to take out more creeps.(and to show off) So Skipper asks Mason and Phil to gather they’re monkey associates to join they’re team, although this has a price
Allies: Ron Stoppable Mickey Mouse Tord

The Penguins and Agent P
Disk: O.W.C.A Files of Madagascar
The Penguins will deal 20% more damage to stunned enemies
Upon meeting Agent P Skipper is impressed by his fighting style, Skipper asks if O.W.C.A can train them in the style of fighting Agent P has.(Along with those fancy hats)
Allies: Kim Possible Bolt Marty

I think this is amazing! The movie is hilarious! I like their friendship with Agent P, it makes a lot of sense. But there is one typo.

Even so, the concept is great!

Oh whoops lol, thank you though