Welcome to the Disney Heroes: Battle Mode 4.4.10 Update! This release features Mayor Bellwether from Disney’s Zootopia, a new feature called Patch, plus a number of improvements and bug fixes.

Mayor Bellwether is a back-line “Support” character on the Yellow team, aiming to win with well-placed darts. Mayor Bellwether will be available in the Prize Wall starting November 24!

The Art Of Dart

Mayor Bellwether can now dart an additional target for both “Foe Frenzy” and “Ally Ambush”. Allies darted by “Ally Ambush” are also Cleansed and Healed for an amount of HP.

Patch will arrive on November 15th and we want to give you a preview of what’s coming! There will be new seasonal Franchise Trials, and a revolutionary new progression system called Patch! We plan for each season to last one month, but we plan to gather feedback and review the data and we may make adjustments later.

Each Season, you’re challenged to defeat waves of enemies using only Heroes from specific Featured Franchises. Each new Season will Feature several new Franchises. In this first Season, we’re Featuring Zootopia, Big Hero 6, and Aladdin! Use the new Franchise Filter to focus on and invest in these Heroes to earn the greatest rewards.

Once you’ve gathered enough Patch Essence, you can spend it to gain incredible combat advantages with Patch Levels, Patch Power, and Patch Talents!

This is a full app and server update that is currently planned for Tuesday, November 15, 2022.

Mayor Bellwether is a back-line “Support”

Wait, she is a mayor?

Sorry but are you taking her from the part of the movie where she was the current Mayor of Zootopia?!?

I trough she would be only Bellwether.

Oh by the way this is the quote I choose for this update if you see my link.

" Fear always works! And I’ll dart every creep in the city to keep it that way.

Hope you like that quote I choose for the update.

For each enemy Mayor Bellwether Scares with “Not Amused”, she and her allies Heal for an amount of HP.

Damage for a duration.

There is some text missing or a typo here?

The format of this section is very difficult to read
But thank you for this!!!
Hopefully bring back some older heroes to meta or usefulness at least

Based on this I assume we will have another patch notes before 24 November to indicate where the old prize wall heroes will rotate to?

Wow, another feature to dig deep for money, can’t wait for the „special patch offer“

Maybe make first sure, that people can max other things in the game (red skill, mods, disks, battle badges) and then offer new things like this. I hope this is well capped and not totally imbalanced to go to infinity

Oh I almost forget to put this. 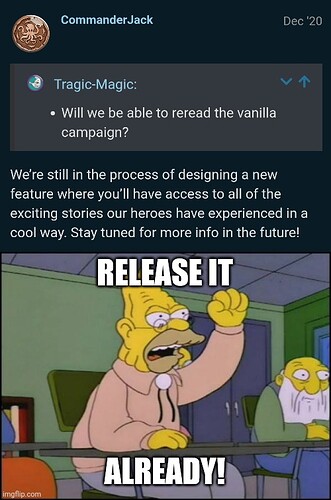 This is not going to happen. Sorry.

There is no finanical benefit for them to release this and spend time developing it.

Patched heroes will be a money grab like red skills, megabits, disk power, mod power, gold and stamina and it will once again come down to who can spend the most.

This is not going to happen. Sorry.

I remember back in the days a lot of people complain about Kim Possible. Until they got her.

If they archive it we can do it again if we gather as community one more time.

Not much into yet another Zootopia hero, 7 was enough, but there was no villain so I can forgive.
Her skillset sounds good too, hopefully she will have good evasion to work full-time!

More faces which deal damage, first Disgust and now she!

Awww, someone was reading my thread for hero refreshes ideas?!
Very happy to see that Judy’s inspires will last longer, finally!
Yax and Jafar refreshes are definitely great, poor Yax never had anything.
And this is more than I ever thought…

But Wasabi refresh? Kinda unnecessary. Hiro, Finnick or Nick would be better.

Something new, something great, I hope.

When Joy will be fixed?

Patch will arrive on November 14th

This is a full app and server update that is currently planned for Tuesday, November 15, 2022.

But how that will happen?

And Judy, Yax, Baymax, Jafar will get their core stats increased again? Definitely welcome if so!

Let’s go! Like I said before, I think AngerIII got his wish!

Welp, this is a pretty great set of Patch Notes. Hooray!

Corrected! And to clarify: Patch will arrive on Tuesday November 15th WITH the update!

I appreciate you pointing that out!

Before The Codebase was released:

What sort of scaling can we expect here?

Pretty much immediately after release:

The Megabit drops from The Codebase are the same as they were for Y1 and Y0.

And a while after that:

is the Codebase going to drop more megabits for players above level 245 when the new rank is released?

We are now at Y21 requiring exponentially more Megabits to upgrade our Battle Badges, that’s nearly 2 years later, and The Codebase is now defeated in 0.5 seconds and drops exactly the same number of Megabits as it always did.

The feature had great promise, but despite it having been brought up as feedback over the months and the flaws being so blatantly obvious, it hasn’t been touched.

Instead of The Codebase scaling and dropping more Megabits, the Megabits have started popping up in IAP in huge quanitites.

We want to be encouraged to play the game, not just throw money at it because it’s the only option.

Please don’t do this with Patch Trials / Essence… this also looks like it could be really promising, but will be just absurdly disappointing if nothing has been learnt from The Codebase. It absolutely must scale with rank.

SO MANY HERO REFRESHES AND RANDOM SKILL REFRESHES!! this must be one of the biggest patch notes yet!

Could be possible to add ‘’##’’ before each name, currently it’s too bland together.

I’m Glad Bellwether is coming in the game and I understand they had to add someone from Zootopia because of Zootopia+ Now Zootopia is the third franchise with the most characters.