EDIT 1: first strike was amazing. Support has been unreal. We do the same thing next monday. if no answer by then, we add either tuesday, wednesday or thursday to the list!

*EDIT 2: second strike commences. This is Monday, tuesday and wednes. Though many core strikers have begun striking all week, indefinitely until some form of reply or change. All servers are welcome.

Along with some good server peers, we have managed to orchestrate a server wide purchase strike. So far, every monday when contest ends, when shop refreshes, 24 hours onwards. First time tomorrow.

Why? Because we feel it is highly unfair that we still pay such high an amount of money for things this far in to our server(both 21/22) history. We have solid comparable intel on that no other servers had matching prices to ours at same server age. We are literally being overcharged compared to other servers. We want to know why? when will we have the same rates as other servers? we understand how the progression of quantity works, thats not the problem. we know we are supposed to get less. We don’t understand why we have to pay 10 dollars for 71 batteries STILL.
So - we want to know, when will a shift happen? Right now our biggest hope is when red arrives for us. If things dont happen by then, our monday strike will very fast become a 3 day strike or more. We’ll make them bleed slow and nice.
now you may be thinking ‘‘lol, a strike? that holds no power, people will buy anyway’’. Sure. some will. But sadly for PB we have managed to get an astonishing number of people to join in. Some of our servers biggest buyers. we are talking several VIP 20’s. this WILL hurt them economically. If you are on server 21 I encourage you to join in, and let it be known in this thread. If you’re on server 22, I encourage you to take this to your top guilds.

Dear PB, please talk with us about this. You’ll see the numbers. Make change.

Here is a list of people who all have vocally complied with the strike notice.

So only 1 day strike?

I do think that this is a good idea, but do not be surprised if it does not work out. I do hope you succeed. I wish your server luck. Really, I think this would work better if all the servers strike. Honestly, PB has been trying to get $$ and not shown much mercy when many are struggling during this pandemic. I am on server 19 as a F2P and I wish you guys the best as your strike begins.

Idk, how this strike might turn out, and what might happen after this strike, but I think there is unfair or rip off deals, in all servers with guild gifts, being one of them.

Like 10 hero chips for 5 dollars?!?! That is a complete rip off since, it isn’t that hard to obtain hero chips, especially of that amount is 10.

Some other rip off deals are the deals worth diamonds that give hero chips. I say that they are horrible because hero chips for beta heroes or characters released early in the game are really low, priced like 90 chips for like 1200 diamonds which is still way to high imo. But, for heroes released in previous updates, from this year, just 60 of their chips is 12,000 diamonds.

So, yes I think this is a good idea for a purchase strike, even though I don’t spend money on the game.

Here is a list of guilds with leaders who encourage their members to strike.

Hey guys,
I’m officer in second ranked German guild Krümelmonster AG. I’m the Officer who is the most active on the forums and I tell the others about the activities here. So you can add Krümelmonster AG to the guilds…
Greetings, Irrer Minnie

(I told them to strike too)

I agree with this strike as part of the 2319 guild. I have stopped spending as the more I spent, the less I got.

Count me in as well

From Server 21 as well.
A member of Team Ballin. Not spending a dime if the deals just dont feel worth it.
Please reconsider the pricing and potentially earn more money that way as well.
Its up to you PerBlu.

Good luck, but this isn’t the first time people have tried this, last time they tried to get every server in on it, the top whales don’t stop buying every deal without looking at what it is. On server 2 deals have been meh for awhile, but the exponential cost of hero maintenance after R10 is killing the game experience. The game isn’t balanced cost wise unless you’re a heavy spender.

Server 2 is going in with us for a strike too:

I would like to propose to server 2 and any other servers within the game to join me in not spending any money after this upcoming update that gives Basil. Rationale: PB doesnt seem to understand or even acknowledge the amount of players who complain about the same things pre & post updates about the speed to which cap increases. Gold is very scarce within the game and with each cap increase the badge cost is getting worse, alokg with items that are suppose to help with this ARENT working! In…

I’m not paying my subscriptions.
I’m not buying any deals until you give us proper, fair ones!

I would buy more if you gave us better deals, I think more people would too.

We’re being ripped off.

Guild : Band of Misfitz is also on strike and I hope we get the same package deals offered on other servers 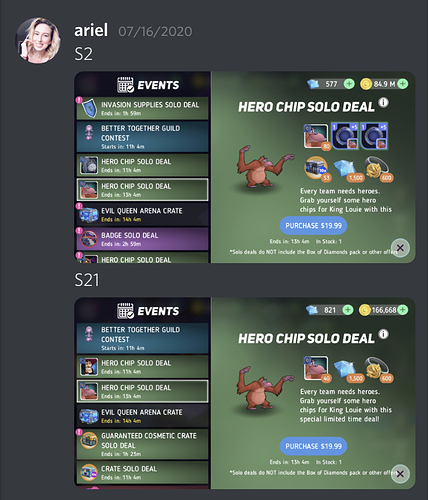 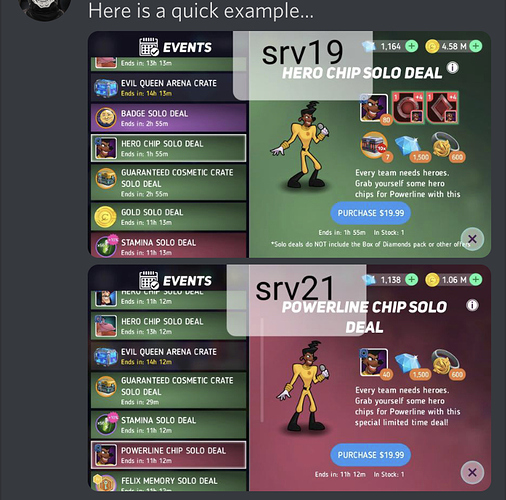 The dude. Leader of Best of the Best
Server 1

I am also striking today. This is ridiculous. I know we don’t have red skills yet (tomorrow!) but when the spenders are having trouble keeping up between patches, then theres a serious problem.

Fairy Godmother, The Mob guild leader (top 10 guild) here. We are with you. My members are fed up.

Terror Tomix (Officer from The Mob). We 100% stand with you. This is ridiculous and needs to change

The difference between Server 21 and Server 1 currently. Although, they are an older server, they had a greater value from deals when they were our age 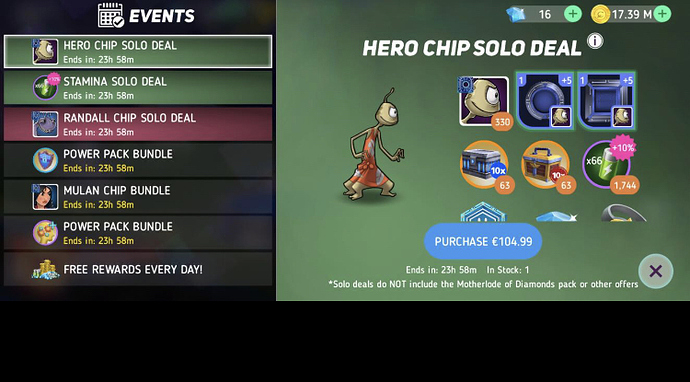 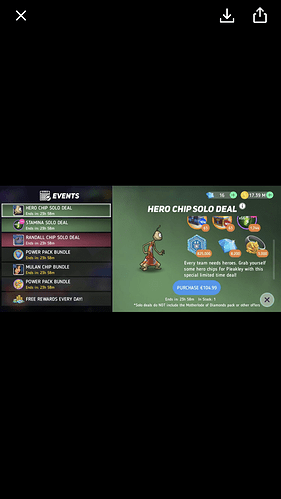 Paulie Walnuts in The Mob, vip 14 and won’t be spending anymore money until the issue is resolved. Viva la revolucion

SugaMadic here from s21 and I’m a part of 2319 also. We do get shafted on value 100%. I’ve spent money but the deals definitely got worse. Now red coming tomorrow and PB thinking they cashing in not from me not til things change. I’m VIP 18 I’ve spent money not just on contest but because I like this game however it’s pretty sad your gauging us and weakening the offers. I’m done spending unless this issue is resolved. I’ve also posted screenshots of deals I got on s19 compared to s21. The top one of each set is s19 and the bottom is s21.