Hello everyone and welcome to Disney Heroes Battle Mode’s third year anniversary! Three years of working together as a game team and as a community, of Disney characters, of hard work, and of fun! We’ve been through a lot as a global community in the last year plus, but it’s also been incredibly heartwarming to see us all pull through as a micro-community of the world: the community of our game.

This past year we’ve started collaborating with you more directly to decide a big chunk of our area of focus in updates. The first time we asked you all what we should focus on for Quality of Life improvements was back in May of 2020 and you asked us to take a hard look at Invasion! Since then we worked with you to identify exactly what issues in Invasion needed to be solved. We changed the reward tier structures so that you can get the majority of your goodies at the beginning, we added Auto Quick Fight and shortened the number of Breaker Quests per wave. The largest Invasion change by far for this cycle of improvements was the Invasion Difficulty Scaling which lets more players participate in Invasion.

Since the last State of the Game in December 2020 we’ve released 15 new heroes, expanded the campaign map, added a new Rank and 2 new modes in Trials - the Codebase and Hero Spotlight. We know that the Yellow Rank is a new time commitment in the game, so we’re doing some final polish right now on Red Rank time savers. We’ll have Epic City Watch raiding, and add Red Rank to our skill sliders and a Max Skill button coming soon. Also in the next update, we’re upgrading Power Crafting to allow players to Power Promote their heroes multiple ranks at once!

Looking forward over the next few months, we’re continuing work on hero management! With 145 heroes and so many different status effects and skills, we’ll be bringing you custom filters that will allow you to build teams faster and more easily. We saw your feedback about the Anniversary Spotlight so the team is working on making that a recurring feature. The design team has other ideas that aren’t quite ready to share yet!

As always we’re working to ensure updates are as smooth as possible, heroes are well balanced and the game continues to scale as it grows. We look forward to more Dev Q&A sessions and hearing about your favorite things about DH. Looking back on the last three years it’s incredible to see how much we’ve changed the game, how we’ve collaborated to make Disney Heroes the best version of itself for the community, and how we all look forward to what the next three years and beyond will bring!

First of all looks good!!

Second of all, calling @Kira here because they wanted to see it

Looks interesting, but as asked below here I’m wondering how it will go with Skill Chips. How it would be generated or how we might be able to choose…

Very nice to see this will become a recurring feature to test out different kinds of heroes at a maxed state!

Well that are my thoughts for now. Wasn’t really a big State of Game this time and yeah as Kira said below here, missing parts on Stamina/badges stuff, but it is what it is.

How will this work? Like, how will the game choose which chips to assign?

Yup. I had the game when it first came out, and then deleted it (I don’t remember why). I decided to pick it up again in December (I think) and I am glad I did. Although I don’t play the game anymore, I am glad I found this community. Not only do we discuss DHBM, but just Disney in general.
Thank you, @Polaris for an amazing 3 years.

Actually, saw it as it was posted and have posted it in the Disney Heroes community Discord server :-).

Also in the next update, we’re upgrading Power Crafting to allow players to Power Promote their heroes multiple ranks at once!

I wonder about this.

Does that mean the ability to raise at least slightly more heroes than what we see now?

make Disney Heroes the best version of itself for the community, and how we all look forward to what the next three years and beyond will bring!

I wouldn’t say the current version is the best of the game, the power creep (stat raising of new characters vs old) and cost creep (cost of maxing the character vs gain per 4 weeks) needs to be resolved. Once that is done, I believe you might slightly narrow the decrease in playerbase we have now.

Also in the next update, we’re upgrading Power Crafting to allow players to Power Promote their heroes multiple ranks at once!

because she wanted to see it

How do you know Kira is a she? Did they ever say so?

How will this work? Like, how will the game choose which chips to assign?

I suppose it will drop skill chips for 5 heroes you assign the Reset to. Makes the most sense.

I am very much looking forward to multiple rank promoting, red rank skill slider and epic CW time saving. Those are features that are much needed and appreciated. Now we just need resources scaled again since Yellow needs such a high amount of XP for those badges.

And, also we need something to max red skills.
It takes HUGE amount of chips and skill chips for a Single Maxed Red Skill.

I go by they online mainly technically :-).

But yeah, to the Power Crafting thing seems nice.

Now we just need resources scaled again since Yellow needs such a high amount of XP for those badges.

I still want the early(er) chapters costing far less stamina. That would be the best thing done right now. Although it would need a reduce in stamina deals, which will aggro P2W players.

I go by they online mainly technically :-).

Also added my thoughts in the post (was on my phone just yet, now on my computers it is more easy to share thoughts here)

So a few things I’ve asked before @Polaris regarding features of the game… When is Lightning Rob ever coming? 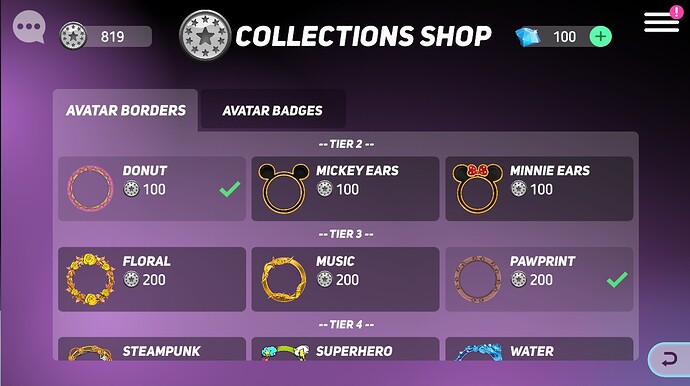 True, those features would make me happier than seeing new heroes in the game. Especially if Carl is not the last from UP to show up.

the team is working on making that a recurring feature

Isn’t power-crafting free? If it is, then power-promoting should be too

Quick crafting is what is free.