I know I said I would do Eclipsa Butterfly and then Cruella de Vil, but inspiration struck me when I was rewatching the transformation scene in Snow White.

At least you still get a queen of darkness, right?

Most if not all of the following gifs and pics were made by me via Giphy and Imgflip, in case anybody else would like to start making gifs for their own concepts - especially if you’re trying to find an exact scene that’ll fit, but you just can’t find it anywhere.

Special thanks as always to @Bossmama for always collaborating with me on character concepts.

The Evil Queen was initially built as a counter to Goofy, Alice, and Duke Caboom’s Speed boosting skills, but she later evolved into countering most if not all Support boosts. Anger from Inside Out funnily enough counters her since he’s immune to her skills. 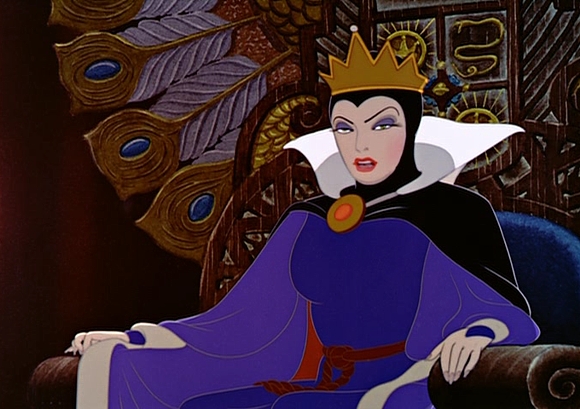 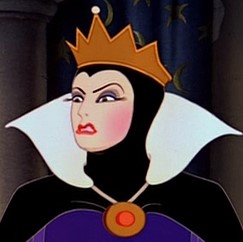 Quote: “When she breaks the tender peel, to taste the apple in my hand, her breath will still, her blood congeal, then I’ll be fairest in the land!”

Bio: A cunning queen who dabbles in forbidden alchemy, she dominates the battlefield with an array of debilitating potions.

The Evil Queen’s stats would see her having decent HP, high Reality, and low Armor.
The low Armor is a reference to her demise where she gets crushed by a boulder after falling off a cliff.

High Reality and little to no Armor seems to be a trend amongst characters from fantasy movies like Maleficent, Sally and Sulley.

Entrance:
The Evil Queen marches onto the battlefield with her chalice (yes, I know the gifs used here has her holding a chest - use your imagination).

Victory:
The Evil Queen raises her chalice, laughing, as a lightning bolt strikes it.

Defeat:
The Evil Queen transforms into the Old Hag. 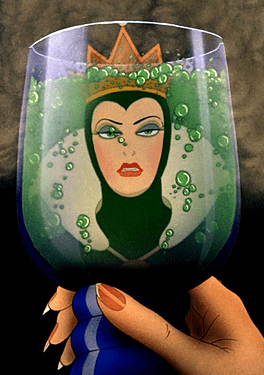 Passive: Instead of having a regular attack, The Evil Queen brews different concoctions to inflict ailments. Her first mixture Blinds foes for 4 seconds, and Slows them down for 2 seconds. Her second mixture lowers their Armor and Reality by 250. Her third mixture Scares foes for 5 seconds.

The Evil Queen can only make concoctions every 10 seconds.

The ailments have a chance to fail on enemies higher than level 1.

Animation:
The Evil Queen consumes her potion, before a swirl of multicolored lights and bubbles cycle through the opponents.

Active: The Evil Queen employs treacherous sorcery to steal the opposing team’s buffs, distributing it to her allies.

Has a chance to fail on enemies higher than level 1. 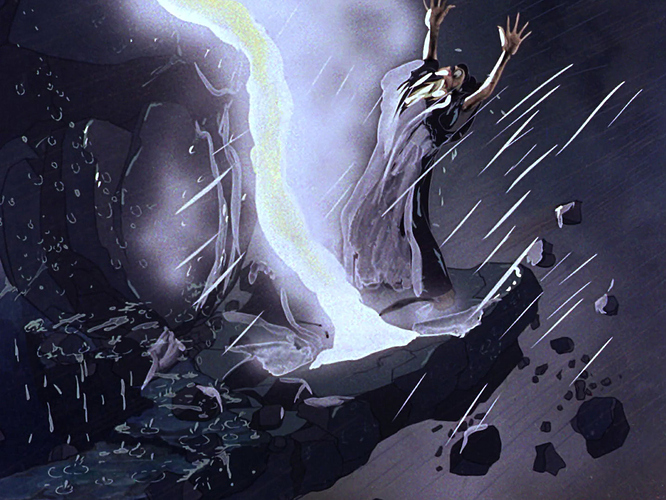 Bio: The Evil Queen calls down wicked thunderbolts to strike 3 enemies, Front, Middle, and Back, dealing 1812 damage in addition to Slowing them down for 4 seconds. Enemies damaged by Polymerizing Fulmination will gain the “Poison Apple” status.

Enemies affected by “Poison Apple” will become Stunned for 6 seconds if they are struck by Fantastical attacks.

Fun fact, we originally also had another status for this skill, where enemies would be Stunned for 2 seconds on top of the Slow (because of electrocution), but I ultimately had to scrap it because of the Poison Apple status - you’ll see very soon why I scrapped Stun from this skill. 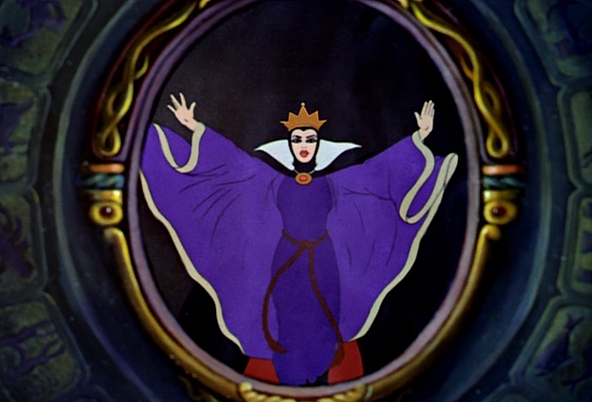 Bio: The Evil Queen summons a blast of wind to knock back the enemy ranks, damaging them for 1938.

Obviously, if this were to be in the game, the wind would be coming from the other direction, from the left.

It truly is a testament to her delightful wickedness, with how her follow-up attack not only knocks back enemies, but also Stuns 3 enemies right after her previous attack.

Surprisingly this one didn’t have a lot of numbers for a change.

As always, 1993 is for the original publication of The Nightmare Before Christmas.

I would do more dialogue, if it weren’t for the fact that most intro conversations aren’t that long.

Also, for Maleficent’s first line of dialogue, she’s indirectly throwing shade at The Queen of Hearts, since she probably would not consider her to be actual royalty, much like Scar.

If The Evil Queen were to be considered for a character in the future, which, why wouldn’t she?, I hope this build will get some attention as it is the original villain who started it all, @Polaris

If you liked this set, consider checking out my other sets I did for Cinderella.

Until next time, see ya!

Update: the glitch has been fixed!

It is confirmed. You are my competition.

I really like this concept. Love it. It is just genious

white skill: Is these Enhancements referring to Badge enhancements? Or something else??

If it is Enhancements, Then this skill wpuld be useless to those who do not enhance their badges (Like me)

Next,why does being struck by lightning give a Deadly Apple skill?

But above that, does this ailment mean they are stunned for eight seconds they are dealt Fantastic damage or just one time??

It is confirmed. You are my competition.

I really like this concept. Love it. It is just genious

Thank you, I’m happy to hear that you liked it!

white skill: Is these Enhancements referring to Badge enhancements? Or something else??

If it is Enhancements, Then this skill wpuld be useless to those who do not enhance their badges (Like me)

Next,why does being struck by lightning give a Deadly Apple skill?

But above that, does this ailment mean they are stunned for eight seconds they are dealt Fantastic damage or just one time??

I meant that she steals buffs and boosts (any Support skills, really) that the enemy team has, like Shields or Speed Boosts. I originally had “buffs and boosts,” but decided it didn’t sound so good, so I went off in search of a better synonym and found that. Sorry for the confusion.

I would edit it back in, however, for some reason, the edit reason for this post as well has disappeared; it’s starting to get a little disconcerting, considering my build for Lady Tremaine and Fairy Godmother still have the edit option. Do you know if this is a glitch or something? Or if there’s a solution for it?

Mmm, what I was thinking was that the final potion The Evil Queen had was a similar color to the liquid in her cauldron when she was creating the poisoned apple - both scenes were when she was finishing up a recipe, so I drew a link between it.

Perhaps it doesn’t make too much sense, however, Perblue could just run with it, taking liberties here and there - I mean, they did the same thing for Maleficent and her Fog of Doom - in the movie, it’s the fairy godmothers who put the entire kingdom to sleep, not Maleficent herself - her Fog of Doom was part of an incantation to summon a forest of thorns around King Stefan’s castle, to prevent Prince Philippe from reaching Aurora.

(Tia Dalma also somehow charms enemies with a thunderbolt, so…

The “Poisoned Apple” ailment goes away either when they’ve been struck by a Fantastical attack, or if it gets cured by Flynn’s Power Cleanse. Also, they’re only Stunned for 6 seconds once they’ve been struck; the extra 2 seconds were scrapped in development in favor for the aforementioned 6 seconds.

This has to be the best concept I’ve ever seen

it’s just so good I love the skills I LOVE EVERYTHING ABOUT IT! I really really hope you do more!

Thank you, I’m happy that you loved it!

I do plan to do more, so stick around!

This has to be the best concept I’ve ever seen

it’s just so good I love the skills I LOVE EVERYTHING ABOUT IT! I really really hope you do more!